Are We Stuck In Intellectual Neutral?

I thought this was apropos to post on New Year’s Day, a video by one of my favorite contemporary philosophers. In it he addresses the question, “Are we (Christians) stuck intellectual neutral?” In 1980, a distinguished academic and statesman Charles Malik said this:

I must be frank with you: the greatest danger confronting American evangelical Christianity is the danger of anti-intellectualism. The mind in its greatest and deepest reaches is not cared for enough….The result is that the arena of creative thinking is vacated and abdicated to the enemy. Who among evangelicals can stand up to the great secular scholars on their own terms of scholarship? Who among evangelical scholars is quoted as a normative source by the greatest secular authorities on history or philosophy or psychology or sociology or politics? Does the evangelical mode of thinking have the slightest chance of becoming the dominant mode in the great universities of Europe and America that stamp our civilization with their spirit and ideas? For the sake of greater effectiveness in witnessing to Jesus Christ, as well as for their own sakes, evangelicals cannot afford to keep on living on the periphery of responsible intellectual existence.[1]

William Lane Craig’s message here is a bit long for those addicted to satisfying their short attention spans, but I think this is worth watching.

By the way, the cartoon he refers to in the video is this: 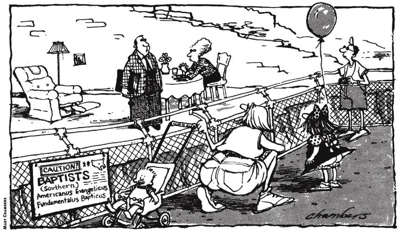